Section 206 of the Elections Act, 2017 reads: “A political party shall make the selection of candidates for elective offices, including membership of the Majlis-e-Shoora (Parliament) and Provincial Assemblies, through a transparent and democratic procedure and while making the selection of candidates on general seats shall ensure at least five per cent representation of women candidates”. Under Section 215 of the Act, parties that failed to meet the requirement would not be entitled to an election symbol.

Though it appears as if parties are required to award five per cent tickets for general seats to women, the ECP has made it easier for political parties to clear the test by combining the number of tickets awarded by the parties to calculate the percentage of women awarded party tickets.

According to the details released by the ECP, the Pakistan Peoples Party (PPP) issued the highest number of party tickets to women, followed by the Pakistan Tehreek-i-Insaf (PTI) and the Pakistan Muslim League-Nawaz (PML-N).

The Muttahida Majlis-i-Amal (MMA), an amalgam of religious parties, was required to award 30 tickets to women, out of the total 583 tickets it had allotted its candidates, and it also issued three more tickets to women than the mandatory requirement.

The Tehreek-i-Labbaik Pakistan (TLP), which surprised many by jumping into the electoral politics in a big way, fielded a total of 556 candidates, and under the five per cent formula, was required to give 27 tickets to women. It awarded 37 tickets to females — 10 more than the requirement.

The Allah-o-Akbar Tehreek (AAT) — a platform being used by candidates of Muttahida Muslim League (MML) which had been denied registration for having links with the banned outfit Jamaatud Dawa was required to give 12 tickets to female candidates, but did not meet the requirement and awarded only 10 tickets.

The political parties which issued less than 20 tickets to its members were not required, under law, to give tickets to women. Taking advantage of the vague wording of the law, the Election Commission of Pakistan (ECP) has cleared all major political parties on meeting the requirement of awarding five per cent of their tickets for general seats in parliament and the provincial assemblies to women. 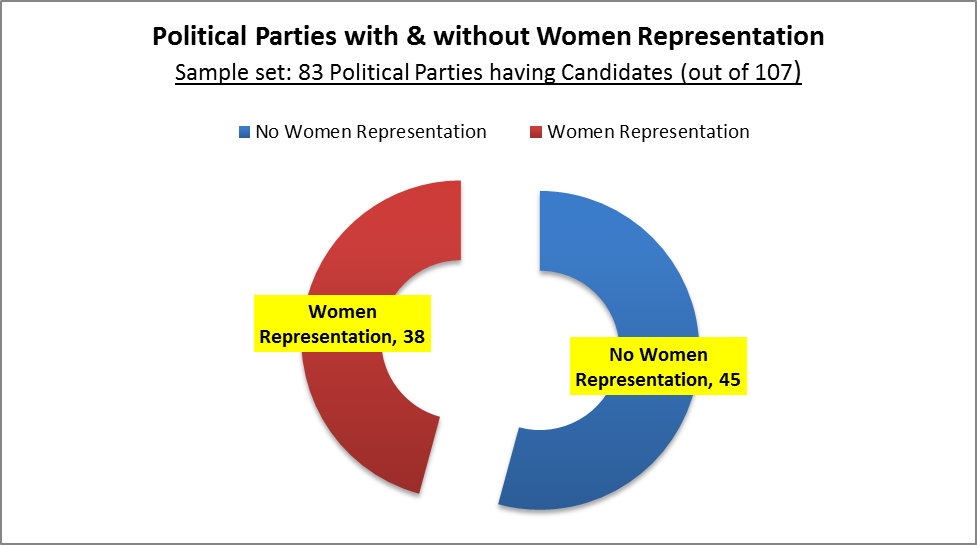