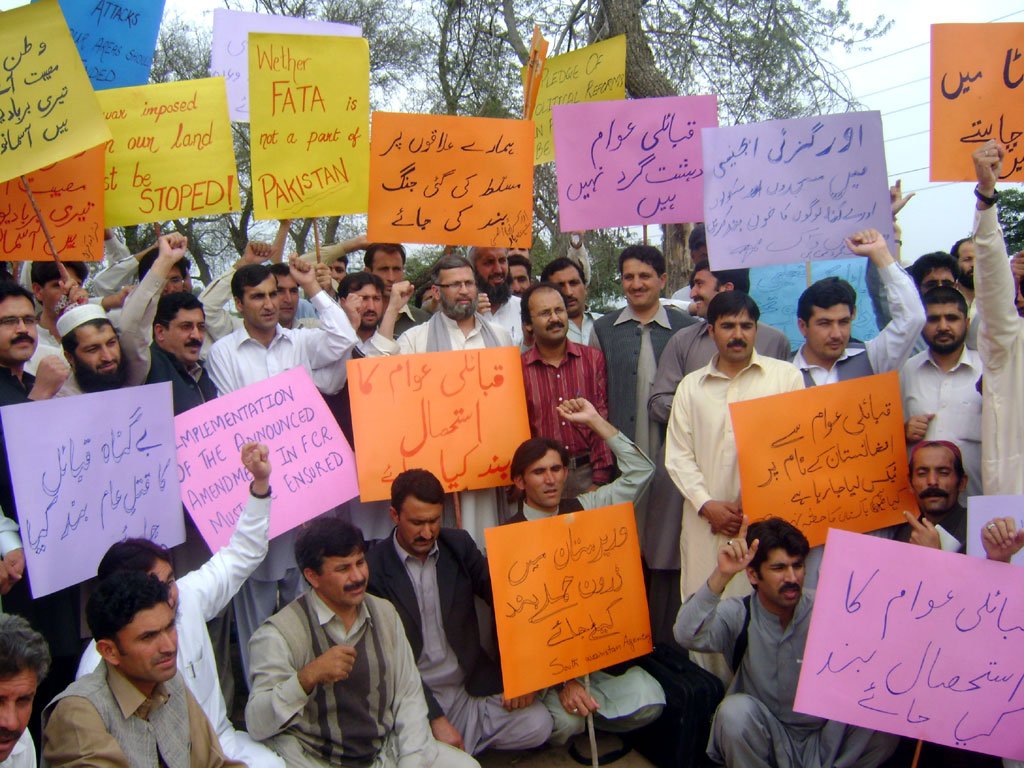 Stakeholders are pinning high hopes with the extension of Political Parties Order (PPO), 2001, in Federally Administered Tribal Areas (FATA). With general elections are round the corner the implementation of PPO is the first but necessary step to bring about political reforms in otherwise restive and most backward areas of Pakistan.

Bringing FATA in the mainstream has been an elusive dream for past 65 years. Pakistan appeared on map of the world in 1947 when FATA and Afghanistan were primarily treated as a buffer zone between British and Russian empires.

Since then lot of water has flown under the bridge, yet situation in FATA exacerbated with every successive government pulling counterproductive solutions out of the hat.

The complexity surrounding FATA affairs dismisses over-simplification of the whole affair, as most of people do these days. There are dividing opinions among the political leadership and the league of analysts. There are people who strongly believe the political reforms like implementation of PPO will bring about gradual but durable change in those troubled areas to the larger benefit of the impoverished communities. Those who offer counter-narratives argue unless administrative reforms are done talking about political reforms would be a useless exercise.

“It was long due. It’s the first step of mainstreaming FATA. It may not be having desired momentum in the beginning, but it will pick the speed soon,” observed Ahmed Bilal Mehboob, executive director Pakistan Institute of Legislative Development and Transparency (PILDAT).

Not all politicians who hail from FATA share a similar sense of optimism. Take Hameedullah Jan Afridi for example, an independent MNA from Khyber Agency. “We should not be overoptimistic with the political reforms in FATA. The political parties have to answer what have they done for the poor people of this area during last 65 years,” he declared.

The backwardness of FATA is an established fact. Factors like absence of political system, poor economic conditions, lack of administrative control and non-existence of the state’s writ contributed to converting FATA into a den of extremism and terrorism.

The Constitution of Pakistan empowers Governor Khyber Pakhtunkhawa (KPK) to have administrative control over FATA. The administrative affairs in FATA are run under colonial-era Frontier Crimes Regulations (FCR). However, the People’s Party government introduced some much-needed reforms in the FCR, in 2011. Critics say there is a lot to be done.

According to an estimate the population of FATA was around 3.5 million, or roughly 2 percent of country’s total population. Frequent military operations and increasing militant activities caused massive demographic changes in the tribal areas. According to December 2012 statistics of the UNHCR as many as 150,000 families of Internally Displaced People (IDPs) were living in different camps.

A FATA Reforms Committee comprising parliamentarians from both opposition and treasury benches have sent important recommendations to the Election Commission of Pakistan (ECP) to take steps to enhance the voters’ participation in the general elections.

The parliamentarians demanded speedy provision of Computerized National Identity Cards (CNIC) to all eligible people in FATA. They also wanted all eligible voters among the IDPs should also be allowed to cast votes.

The PILDAT executive director revealed the number of registered voters in FATA substantially increased since 2008. The major reason of that increase is inclusion of marginalized families within the ambit of Benazir Income Support Programme (BISP). Any deserving person can avail the benefits of the BISP if he/she has a valid CNIC. Consequently, a large number of FATA people got their new CNIC that also guaranteed them to automatically become the registered voters.

“The number of registered voters increased by 31 percent in FATA since 2008. But I agree that a large number of FATA residents are surviving in the IDP camps. And so far there is no mechanism to let them cast their votes there,” the PILDAT official stated.

The recent electoral and political history of FATA is rather interesting. Before 1996 the concept of adult franchise was missing over there. An electoral college of some 35,500 Maliks (the local elders) used to select Members of the National Assembly (MNAs). In the general elections of 1997, 2002 and 2008, the FATA MNAs were directly elected by the people, but the elections at all occasions were held on non-party basis.

In December 2004, the Musharraf regime established provisional agency councils to facilitate local participation in development and other matters. The 2008 general elections were also held on non-party basis, but most FATA MNAs preferred to ally with the ruling coalition. In July 2009, the ruling Awami National Party (ANP) in the KPK passed a demanding incorporation of FATA in the province.

And finally, President Asif Ali Zardari announced a set of FATA reforms including extension of the PPO over there on August 13, 2011. However, the controversial FCR was not abolished but amended. For instance, previously under the FCR a whole tribe can be held accountable for a crime committed by any of its members. Under the amended-FCR the scope of the FCR was shrunk to the family members of the accused.

“Unless we have legal and administrative reforms, it is going to be rather difficult to ensure political reforms,” observed Imtiaz Gul, executive director of the Centre for Research and Security Studies (CRSS).

He said it was wrong to expect the implementation of PPO in FATA would dramatically change the situation. “Still there is a huge space available for the manipulators. It is important to first bring legal and administrative change,” he added.

He hypothesized the militant forces may either disrupt the electoral process or agree to tacitly support some independent candidates to take advantage from them in future.

The security situation despite repeated military operations remained fragile in FATA. As many as 100,000 troops of armed forces are stationed in FATA and the country’s western border to primarily conduct counter-insurgency operations.

The Taliban come from reactionary school of thought. The words “flexibility” and “co-existence” seem to be missing from their dictionary. They speak in the language of violence. The opponents are not reasoned with but eliminated. They have always opposed democracy terming it an un-Islamic model of governance. They demand implementation of a strict Sharia-based system.

Many are scared of violence in the upcoming elections.

“I am scared the next elections are going to be bloody in FATA. The political parties have to go many extra miles to establish their presence,” commented Hameedullah Afridi.

He announced he would contest the elections as independent candidate. He believed the political parties were less popular than influential individuals. He also expressed doubts on the clichéd term of “mainstreaming” FATA.

“If mainstreaming FATA only means letting the political parties get the seats, it will not be acceptable to the people. It should involve social and economic development coupled with undoing the notorious FCR,” he maintained.

Ahmed Bilal Mehboob agreed that personalities would play major role in the next elections, especially in FATA. He explained it was wrong to dismiss the presence and influence of the political parties altogether.

Recently, a senior MNA from FATA Munir Orakzai announced joining Jamiat Ulema-e-Islam. He won the 2002 and 2008 general elections as independent candidate from Kurram Agency. His decision highlighted the importance of affiliating with political parties is well understood in the tribal region as well.

Ejaz Haider, a senior advisor at the Sustainable Development Policy Institute (SDPI), appreciated the decision of extension of PPO in FATA. He added the actual reforms require much more to be done.

He said reforming the tribal areas would be possible by adhering to the policy of clear, hold, build and transfer. “If other requirements are fully or partially fulfilled, the transfer (of power and authority) is not.”

So the political reforms in FATA are likely to guarantee the much-needed transfer of power.

Ajmal Wazir, a PML-Q leader who is also having cordial relations with JUI-F, demanded the political parties should be provided adequate security to conduct their activities. He said the abnormal situation in FATA would require special provision of security measures for the political leaders.

Asked why the politicians in FATA prefer to contest elections as independent candidates, he said the MNAs from tribal areas enjoy special privilege compared to their rest of colleagues. These MNAs constitute an electoral college to elect Senators from the tribal areas. Also the independent MNAs enjoys massive bargaining power like what happened in post 2002 general elections.

The upcoming general elections are a great opportunity to test the implementation of PPO in FATA. Over-optimism would be inappropriate because of paucity of time, fragile security and disorganized political infrastructure. If persists, the continuity of reforms would certainly translate into administrative and economic reforms as well.

The challenges are immense too, yet can be overcome by implementing the recommendations of the FATA Reforms Committee, undoing of FCR and striking a peace deal with the Taliban to hold peaceful elections. –Ends