Independent and pluralist media to guarantee free and fair elections Independent and pluralist media to guarantee free and fair elections

Islamabad: The nation is geared towards first ever election under the watchful gaze of vibrant media and new modes of social communication, said speakers at the seminar, “Election-2013 @ Media” and called for voluntary code of conduct to define the rules of the game.

Seminar was arranged by the Centre for Civic Education to launch its new initiative; Citizens’ Wire that will offer information for democracy in multi-medium. Renowned broadcaster, Agha Nasir shared his experiences of televising country’s first general elections in 1970 at the state-run Pakistan Television.

“It was not only for the first time that the nation had the right to vote on the basis of adult franchise, rather it was a challenge to televise it with modest technologies and geographical barriers,” he said and recalled  the success of “Election Village 1970” that glued the nation to television during the elections. He appreciated the launch of Citizens Wire saying the vibrant media and civil society are the deterrence against electoral manipulations.

Zafarullah Khan, Director Centre for Civic Education said, “the culture of paid political broadcast emerged in 1997 on the state-run media.”  During Election- 2002 the privately owned independent channels were nascent and during Election 2008 their freedom was compromised by the imposition of emergency, he said and opined that Election-2013 will be the test for both the vibrant media and contesting political parties. Senior journalist Hafiz Tahir Khalil observed in highly charged political atmosphere, media is ignoring many important issues. He shared his experiences of covering various elections with a gathering of young reporters. 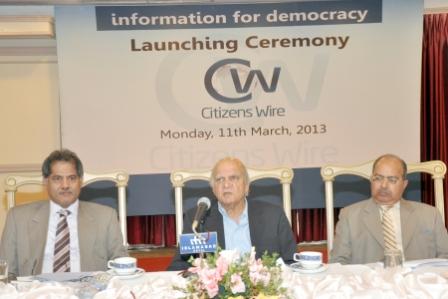 In the second session Chairman, Press Council of Pakistan, Shafqat Khan Abbasi shared the Election reporting guidelines prepared by the council. “We have shared these guide lines with the Election Commission of Pakistan (ECP) to evolve an effective mechanism to monitor the media so that the political competitors are treated on the basis of equality and the citizens are informed on issues to evolve prudent political choices,” he added. It is pertinent to recall that the ECP made public a draft Code of Conduct for Media in September last year and entrusted all tasks related to monitoring print and electronic media to the Pakistan Electronic Media Regulatory Authority (PEMRA). The final Code has yet to see the light of the day.

Azhar Malik, Assistant Country Director (governance) United Nations Development Program, Renowned intellectual and civil society activist, Naseer Memon, Prof. Ahmad Ali Khan, editor Citizens Wire Zafarullah Khan and Adnan Rehmat, Executive Director Intermedia shared their views about the Citizens Wire that is likely to become a unique education and advocacy campaign on democracy, the Constitution, laws and general elections. The service is aimed at raising the awareness level of the electorates so that they can exercise the power of their vote in choosing the best candidates.  Eminent journalists, experts and social activists hailed the initiative calling it most beneficial just before the general elections.

Adnan Rehmat of Intermedia observed there was a big information gap about constitutional issues in a manner to be understood by the common readers. He said Article 19(a) of the Constitution guarantees right of access to information. ‘and the initiatives like Citizens Wire can help realize that constitutional provision,’ he added. Naseer Memon held that democracy is the best system and can never be replaced with any other system no matter how fragile or weak it becomes. He praised the new initiative and urged upon the participants to play their part to make it successful. He said it has to be a collective effort to ensure the democratic transition a real success. Azhar Malik of the United Nations Development Program recommended that social issues must also be discussed on Citizens Wire in the backdrop of promises and pledges by different political parties. Raja Shafqat Abbasi, chairman of press council of Pakistan, said the timing of the launch of Citizens Wire is very crucial. He said the role of media to guarantee free and fair elections is beyond any doubt and dispute. ‘The upcoming general election is a test case for the media. It’s a challenge. And I must say the commercial interest must coincide with the Citizens interest, ‘ he added.