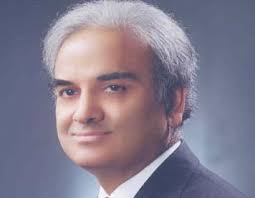 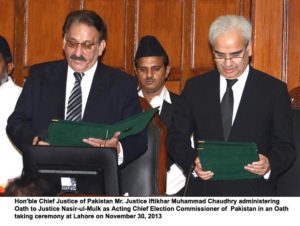 Justice Nasir-ul-Mulk was a barrister-at-law of the Inner Temple, London. He was elected as secretary general, Peshawar High Court Bar Association in 1981.

Justice Mulk was one of the seven judges who signed a restraining order on November 3, 2007, when former president General (retd) Pervez Musharraf imposed emergency and forcibly sent the judges home. He later joined the judiciary on September 20, 2008, under the Naek formula when he took a fresh oath as a judge of the Supreme Court with his seniority intact. 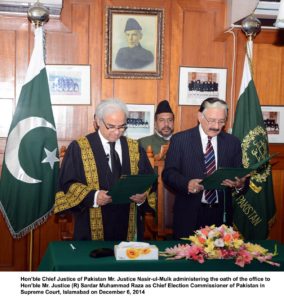 He authored the verdict favouring former Prime Minister Nawaz Sharif’s in the plane hijacking case. The verdict paved the way for Nawaz to return to politics.

The retired judge also headed the seven-member bench that convicted former Prime MinisterYousufRazaGillani for not writing a letter to the Swiss authorities to reopen graft cases against then president Asif Ali Zardari. After the verdict, Gillani was disqualified as the prime minister.Moreover, Justice Mulk headed the commission formed to probe the allegations of 2013 polls being rigged.

Now his challenge is to facilitate smooth civilian to civilian transition.