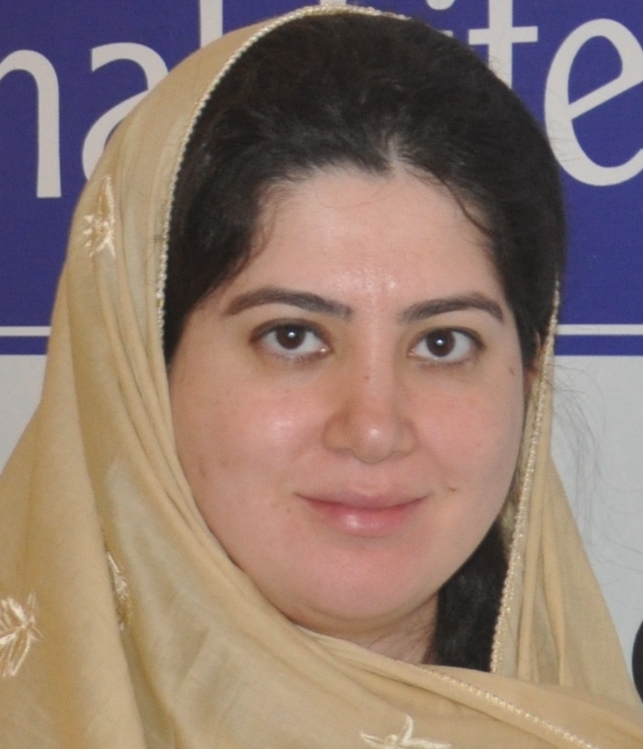 The constitution of Pakistan guarantees Fundamental Rights to all its citizens. Pakistan is party to a number of international treaties regarding human rights, which include a Covenant on Civil and Political Rights including various treaties dealing with Rights like CEDAW which concerns Women Rights, Racial Discrimination Convention, Child Rights Convention and Convention Against Torture.

According to the Constitution of Pakistan, protection and promotion of fundamental human rights is the responsibility of the state. Article 7 of the Constitution, defines the state as federal, provincial, local legislative and executive. In case of violation of these fundamental rights the Constitution has entrusted the Supreme Court and Provincial High Courts to adjudicate.

In terms of Institutional design Pakistan had a Ministry of Human Rights at the federal level and Human Rights Departments in the provinces. In June 2013 the Ministry of Human Rights was merged with the Ministry of Law and Justice. This has created a vacuum at the federal level since there would be only one minister to deal with Legal affairs, the affairs related to the justice system, and issues concerning human rights and the survivors of HR abuses. Matters related to human rights will likely become a distant third priority of the minister in charge.

In May 2012 the Parliament passed an Act to establish the National Commission for Human Rights (NCHR), an independent body to protect and promote human rights in the country. However, after the passage of more than three years, till date it has not been fully operationalized. The NCHR, an independent state body equipped with the mandate to investigate human rights abuses, monitor the situation of human rights in the country and ensure compliance with Pakistan’s international rights obligations, is an important milestone. Considering the current situation of human rights violations, it is urgent to have a functional NCHR in the country. The government has recently formed the Commission, hopefully it will become operational soon, the commission must take measures on a war footing to address human rights issues which will be a real service to the weaker and poorer segments of Pakistani society. NCHR will positively contribute towards the implementation of Pakistan’s international obligations under various human rights treaties that it has ratified. Furthermore, there is an active Functional Committee on Human Rights in the Senate of Pakistan to take up human rights issues.

To provide an expeditious and inexpensive remedy in matters relating to infringements of Fundamental Rights enshrined in the Constitution, a Human Rights Cell has been established in the Supreme Court. The Cell functions under the direct supervision of the Hon’ble Chief Justice of Pakistan. It is mandated to expeditiously process the complaints and grievances received from the general public by post addressed to the Hon’ble Chief Justice of Pakistan. Relief is provided to the poor persons without going through the traditional protracted litigation process. It aims to instill in the general public, a belief that the Supreme Court of Pakistan is vigilant to its duty, assigned by the Constitution, of protecting the fundamental rights of the citizens of Pakistan, especially the vulnerable, voiceless and weaker segments of the society.

The data available from the Human Rights cell for the year 2013-2014, decided over two hundred thousand complaints. The Institution, Disposal and Balance of Cases from April 2013–April 2014 are as follows. 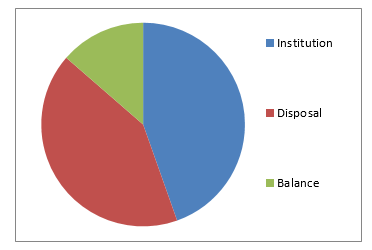 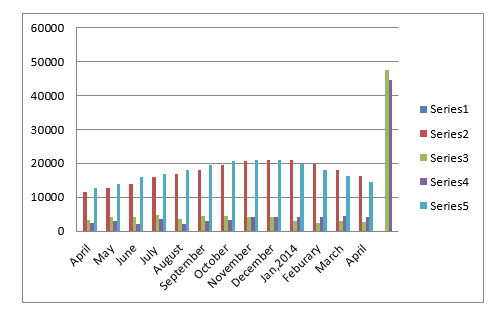 The month wise data shows that against total institution of 47647 complaints, the disposal was 44662. The disposal of cases in the last three months is significantly higher than the institution, according to the trend the pendency of cases will minimize in the coming months. 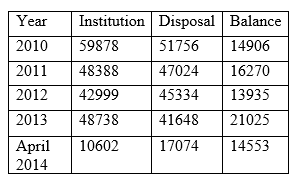 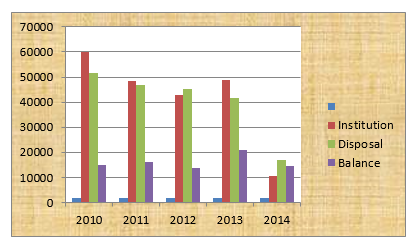 The tabular statistics indicates that the institution since 2010 has increased manifold which on one hand reflects public confidence in the Supreme Court and on the other demanded Human Rights cell to devise innovative steps to cope with the increased number of complaints for required enhanced disposal.

Pakistan has been awarded GSP-Plus status from 1st January 2014, by the European Union; it is conditioned on Pakistan’s ratification and effective implementation of 27 international conventions concerning human rights etc. There is a need for an institutional mechanism in place to protect human rights and ensure timely reporting to international bodies. The Federal Ministry of Commerce and Trade has become active to ensure continuation of these trade concessions. An inter-ministerial treaty implementation committee with representation from all the four federating units has been made to coordinate the country’s reporting and monitor adherence to these international conventions and commitments. It is a shared responsibility of the state and its federating units to adhere to international commitments on human rights, the country reports on various conventions are prepared by the federal government with data provided by the provinces. The civil society urged the federal government to not only pay serious attention to timely reporting, but also to introduce greater transparency and a consultative process while reporting to treaty bodies. In terms of reporting compliance Pakistan is lagging behind the schedule.

Education is a fundamental human right and essential for the exercise of all other human rights. After passing of the18th Constitutional Amendment, education has become a fundamental right of every child through Article 25A of the Constitution; every child is entitled to free and compulsory education from the age of 5 to 16 years. Free and compulsory education is to be provided by the State, which, by definition, includes both Federal and Provincial Governments. The Federal government is not restricted to provide free education only in the Federal Capital but must facilitate this right to all children in all parts of the country. The passage of the bill is indeed a significant historical achievement in Islamabad Capital Territory where over 70, 000 children of age 5 to 16 years are out of school.

The insertion of Article 19-A (Right to Information) under the 18th Constitutional Amendment, gives citizens the right to access information of public importance from their governments has finally become part of the constitution of Pakistan as a Fundamental Right. Though it’s a Constitutional right to have access to information but till date some government organisations are reluctant in providing/sharing information with its citizens.

Following is the outcome of a survey carried out by The Centre for Peace and Development Initiatives (CPDI) regarding requests/complaints of sharing of information of government departments with the citizens.

Information requests sent by CPDI between March 1 to October 31, 2014

The complaints filed across the country were 771:  462 in Punjab, 256 in KP, 24 in Sindh and 29 with federal government departments. These yielded 81 more responses: 53 from Punjab, 18 from KP, 10 from the federal government but none from Sindh. The survey indicates that many government departments are still not ready to share information, though more than three years have passed but till date RTI law is not fully implemented.

Hence, it’s of utmost importance for the state to protect and promote fundamental rights of its citizens since continued denial of fundamental Rights under one pretext or another is a guaranteed recipe for destruction of the very fabric of the society.

There is a dire need to strengthen the culture of human rights in Pakistan. After the devolution of powers, in the wake of 18th Constitutional Amendment, there is a lack of clarity of various institutions at the federal and provincial levels. It is vital to understand that respect for Fundamental Rights is the best and proven way to economic and social progress and peaceful and just society. Fundamental Human Rights being the responsibility of the state must empower the provinces and the Federal government to come up with innovative legislation, policies and most essentially effective implementation of these policies is an important step.

Chapters regarding human rights should be incorporated in the textbooks at all levels to promote and create better human rights culture. Adding various awareness campaigns should be carried out at the community-level by the Federal government, such as booklets being distributed for raising awareness on human rights issues.

[Ms. Farahnaz Khan is a Research Officer at Centre for Civic Education Pakistan]